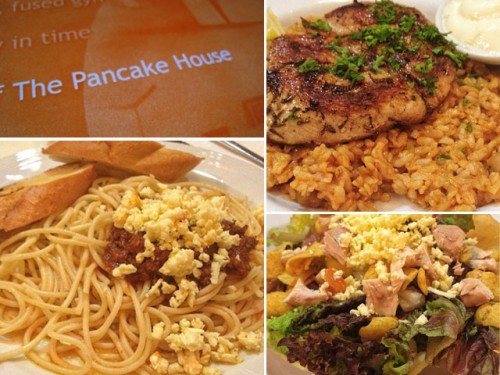 While I would say that I’m a solid Pancake House fan, I won’t go as far as saying that I know everything in their menu by heart.

That’s why when we dined at their High Street branch last night, I was caught off guard because some items were missing from their menu.

We got confused to the point that I convinced the boyfriend that maybe it was another restaurant that had the Hamburger Steak set — and not Pancake House.

Thanks to my bionic ears — and a sheer knack for eavesdropping — I learned that not all branches share the same menu through and through.

With that, we ended up with an item we haven’t tried before–Spicy Chicken with Brown Rice Pilaf. I’m pretty sure most of you guys have tried this, but we really haven’t ever seen this item in their menu. Then again, maybe we just weren’t paying attention.

I was surprised when this was served on our table.

Although the portions were definitely made for a girl and not a man–at least that’s what I think–I can’t argue with the amazing flavor profile this unassumingly simple dish offers. The heat wasn’t off-putting, for me at least. I liked how everything was moist, juicy and tender.

The rice pilaf alone was packed with so much flavor that I could do away with the chicken fillet. It tastes similar to Paella too! Served with garlic cream mayo and a lemon wedge, I would definitely go for this next time. 😀

Why, oh why, did we only found out about this dish just this year?!

P.S.
Obviously, we had Spaghetti and Fiesta Taco Salad too but there aren’t too exciting anymore. But this Spicy Chicken dish is real good!