I’m not in Singapore anymore but I was feeling like I was right smack in the city again when a co-worker brought us to Bugis Singaporean Street Food, a small restaurant at the ground floor of her Grand Towers condo. When we arrived, it was mostly occupied by college students. But since I could still pass as a student, I wasn’t too “insecure” to be surrounded by so much youth. LOL. 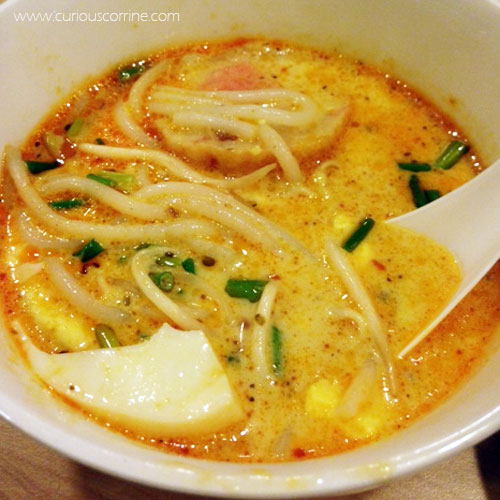 I will begin the food blogging with the runaway winner of the night–their Laksa! All of us were oohing and aahing when it was served because it smelled so divine. It was a happy medley of coconut milk, shrimp, noodles, and more. The soup base itself won me over because it was so spicy. I was blotting my nose with tissue the entire time I was drinking the soup . :p

We ordered individual plates. I was informed that their Porkchop Meal (with egg) is one of the best so I had that. Let me apologize though for using an official photo and not taking a picture of my own meal. I was desperately hungry at the time. I can, however, vouch for the meal’s gargantuan proportions and sulit-ness. 🙂

Another favorite on the dining table was the Milo Dinosaur. How can you not love this simple drink? It’s refreshing, homey, and downright fattening. LOL. This really brought out the kid in me, which was most ideal for the night because we were at Grand Towers for a slumber party. 😀